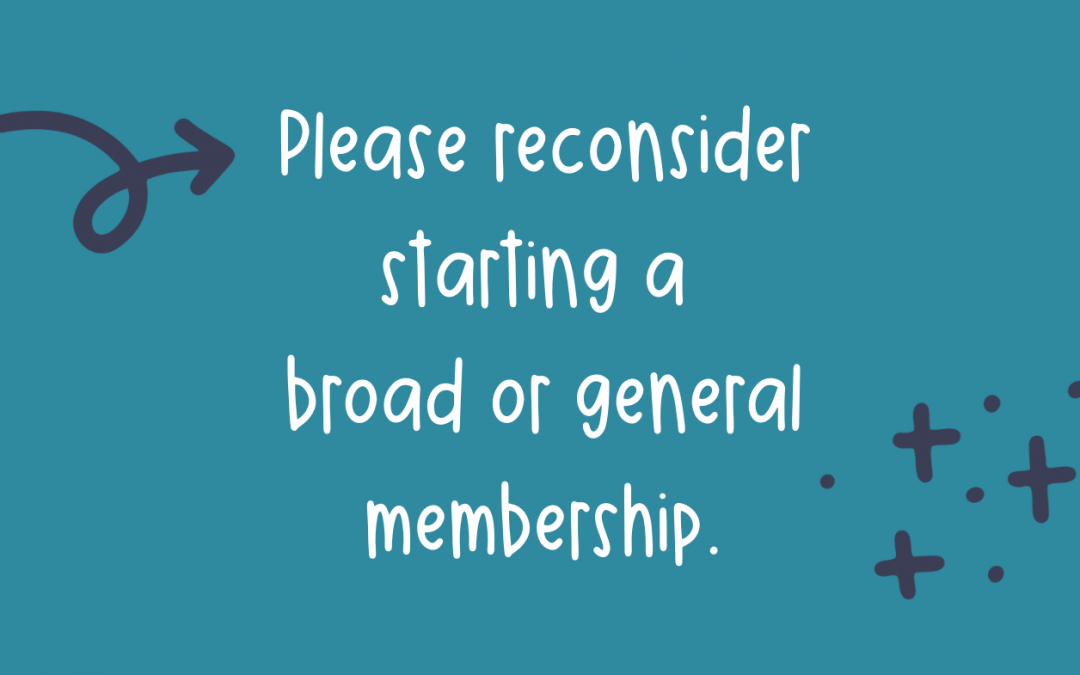 I want to preface everything below by saying that I am 100% not anti-memberships.

I had a successful membership for over 4 years.

I proudly promote other people who teach memberships.

It’s just that in my experience, memberships are an extremely unique beast and aren’t something to undertake lightly.

People tend to start to considering a membership site when they are semi consistently creating courses, digital products and/or trainings.

You may be thinking one of the following:

1. “Let’s just shove these things I’ve created together. Do a new one a month. And get the nice recurring revenue.” The membership plan is basically a string of little mini courses and trainings that your people want and would have bought separately anyway. So why wouldn’t they join the membership and get access to all of them.

2. “Instead of having to launch each thing individually, why don’t I shove them all together in a membership and people can get access to everything? That will be easier to sell.”

3. “I want to create an ‘inner tribe’ of sorts of my top fans to support my work and/or get more direct access to me.”

But usually, in my experience, people join membership sites for very different motivations and reasons from the people who buy separate courses and digital products.

Memberships, in my experience, work best when there is one specific, unique thing about them. e.g.

You’re going to get something that you can’t really get as conveniently or in the same way anywhere else. Your membership needs a specific, unique ‘thing’ that’s not available elsewhere.

(And ‘access to you’ generally isn’t compelling enough unless you have a huge audience and are extremely well established in your work on a specific thing e.g. Gabby Bernstein and modern spirituality).

ConvertKit Club was a specific membership. It was entirely focused on all the support you need to use ConvertKit.

Haute Stock or Style Stock Society are specific memberships that focus around a collection of new stock photos for online business owners each month.

Why I’m not a fan of more general/broad memberships

(as attractive as I know they seem!)

Here’s what happens when you’re a multi-passionate, creative person (I’ve done this myself too!)…

You think “I know, I’ll create a membership that allows me to just have to sell one thing but then everyone can come into it and get all the things.”

But without a very specific focus or point to your membership, it’s much harder to get people to join than it is to get them to buy something with a specific outcome or result.

Whereas joining a membership – it’s much vaguer about what precisely you’re offering e.g. “Do you want to learn how to sell your designs better online? If so, come join this membership. There are going to be trainings that will help you…” It’s a much vaguer proposition when you’ve got a broad membership.

You usually end up charging a lot less for a membership than if you sold the thing(s) you’re giving them each month separately.

e.g. You have a $25 per membership, but if you’d sold the paid live trainings separately they would have been $47.

Aaaand it’s likely that the people who join your membership would have bought (nearly) every training you put out anyway.

When you sell a PLT or any other sort of digital product/course one at a time, buyers are making a decision and commitment in learning/doing that because they have invested in that specific training/course/product.

When it’s included in a membership, and they get it anyway/automatically, they haven’t consciously chosen or decided with their money to buy and learn the thing that month. I find overall you get a lot less people taking action and getting results in a broad membership.

People do not unsubscribe when you don’t create the new trainings. Memberships are not about the content, despite what people think! People might join for the content but they definitely don’t stay for the content.

They don’t unsubscribe if you don’t create the new trainings because they didn’t join for the trainings. They aren’t emotionally invested in learning the specific trainings that are supposedly coming in November or whenever. They might be sort of look forward to it but they’re not planning their business around your membership calendar and what you’re going to be delivering over the coming months.

Paid Live Trainings (and other standalone courses/trainings) get a higher commitment because they’ve actively chosen to part with their money to learn that thing and they show up for that thing. Plus you can charge more.

This is also true for live rounds of your standalone courses… people actively choose to join. If you run a challenge or a monthly focus in a membership, there wasn’t the active choice or not and you may find the engagement levels very frustrating (and less rewarding for you).

It gets messier with other offers

When you’ve got a broad membership, the scope of what is/isn’t included can be a lot messier. Without a very specific focus to the membership it’s harder to justify (to your members), which things they’ll get included, and which they won’t. This can lead to members feeling confused or even a little resentful if they feel like they’ve paid to be ‘in your world’, but then you’re asking them to pay again for additional trainings/courses.

When you’ve only got 10 people though, it kind of just doesn’t really make sense effort to money wise. You end up doing a lot of work for not a lot of money if you don’t have a lot of members.

Unless you batch create content and they don’t have access to you/a Facebook group/etc (which would be more of a specific membership anyway), memberships require ongoing attention. You can’t spend 3-4 weeks on them as a project and then divert your attention elsewhere when you get bored or have a new exciting idea you want to work on. Once you start a membership, they require constant nurturing and energy. In my experience, this doesn’t suit highly creative, multi-passionate people who are always bubbling with new ideas. There’s a moderate chance you’ll feel resentful of your membership demanding your attention when you don’t have all that many members and it only brings in a small amount of money.

As soon as I teach people about paid live trainings, they go “I’m going to create a membership where you get a training every month!“.

I know that sounds very attractive in theory… but in practice it’s harder work.

Lots of people in my audience buy pretty much every thing I sell. And yes, I could create a membership where you get access to every single thing I do, but the relationship wouldn’t be the same because they haven’t actively chosen to do those individual things.

Why do you want to start a broad/general membership?

I really want you to ask this question and get specific about the answer. Why do you want to start a broad/general membership? Recurring revenue? Accountability to create new content regularly? To create community? Memberships aren’t the only way to achieve any of these things you want.

This is obviously a huge advantage of having a membership – recurring revenue.

If you do a course or a group program with a 3 month payment plan, that means you’ll have money coming in over the next few months even though you have nothing more to do or deliver.

Once you build up a variety of payment plans, you start each month knowing you’ve got $XX coming in.

This commitment thing – I totally get it. It’s why I do paid live trainings. Social accountability does not really work for me. ? Whereas with a paid live training I have to be show up at a certain time, in a certain place because people have already paid for it.

There are other ways to build in this accountability outside of a membership. Memberships in and of themselves may well not bring you the accountability you need. When I started ConvertKit Club, they were going to get a new training each month on something ConvertKit related. One month something happened and I didn’t create a new thing and then another month happened where I didn’t create a new one and no one reached out to ask me where the new training was. I felt awful that I hadn’t created a new one but no-one mentioned it. When I did eventually create the new training, when I looked at the stats only about 3 out of the 100 members had actually logged in to look at the new training.

When you have a membership, what you’re creating and doing is on your terms and your time frame rather than people actively opting in. You might find that one month you don’t create a new thing and no one’s even that bothered inside of the membership and your accountability goes out the window!

The last idea I have for you which is potentially recurring revenue and potentially this commitment thing…let’s say you want to do one paid live training a month, plan out the dates for 3 months of paid live trainings then you can sell those 3 paid live trainings as a bundle at a discounted rate. So it’s kind of like a mini 3-month membership so you have had to lock in the next three. So bundling them up is another way to pre-sell and to lock you in on delivering them.

In terms of the community… there are so many ways to create community in your audience without having a membership!

I’m obviously a big fan of a client/student only Facebook group like Team EBG’s Party Pad. The entry into the community is that they have to buy something from you. Most of my sales of everything at the moment are coming from Team EBG’s Party Pad. I’m so motivated to get people to buy something from me so that they get an invite into Party Pad so that they get exposed to me and my world and see all of my promotion inside there. Having Party Pad is like my number one marketing and sales technique.

This could potentially be a way to have a sort of community and you could even have monthly calls in there. So it’s not a membership but it’s a bonus – if you want to stop it, you can. If you want to stop the calls, you can. You can do whatever you want, but you do then have that space and community for paying customers and clients but it’s not a membership where they are paying on an ongoing basis. (But they are extremely likely to continue to buy new things from you as a direct result of being in that group!)

I love the membership model but I think that broad/general memberships are not suitable for most business owners.

Things to consider instead of a general/broad membership:

I hope you’ve found this post helpful! I’d love to hear in the comments if it’s helped you changed your mind about what you’re going to offer in your business.